Advertising Repetition Levels in India are Off the Charts! How Much Money is Being Wasted?

Watching the test match between India and England on TV in India I was staggered at the level of advertising repetition that I experienced. During one hour, I decided to keep track of the commercials aired. The brands and the number of times they advertised during the hour period are below. As one can see, 17 different brands advertised during the hour. These brands covered a broad range of categories across products (e.g., Blenders Pride, Ceat, and Panasonic) and services (e.g., Amazon and McDonald’s), as well as domestic (e.g., Idea, Fogg, and Kent) and global (Axe, Google, and Suzuki) brands. Of the 17 brands that advertised, 11, or a whopping 65%, aired their ads three times or more, with Gionee, the Chinese mobile phone maker showing the exact same creative a mind numbing 7 times during the hour!

This brings me to the main point of this blog.  Why so much repetition?  Theory has it that consumer response to repetition follows an inverted-U shape.  That is, initially, consumer response increases with repetition, as consumers learn about the brand, but then declines, as repeatedly watching a brand’s advertising becomes boring and irritating.  The point at which additional exposures has a negative impact depends on the complexity of the advertising, the amount of attention consumers pay to advertising, and the like.  Most lab studies, which show participants ads embedded in a TV program during a viewing episode of less than one hour find that optimal impact is reached with three exposures, declining thereafter. According to Siddarth and Chattopadhyay (1998)[1], field studies find that incremental repetitions starts to have a negative impact on consumer responses somewhere between 12 to 15 exposures over a two-month period.  Indeed, Siddarth and Chattopadhyay (1998), show that, across product categories, consumers are likely to channel switch while watching TV, if they see a given commercial more than 14.5 times, and also show that channel switching negatively impacts purchase behavior. Importantly, these results were obtained using a dataset spanning two years!

To those of you who don’t know about cricket, a day of test cricket spans three, two-hour sessions.  The ads above were repeated throughout the day. Thus, 65% of the brands above would have been seen 18 times or more while viewing a single day’s play; for Gionee, the most advertised brand, there would have been 42 exposures. Across the five days of a cricket test match, and ardent follower of the game would have seen 65% of the ads a nauseating 90 times or more and even the lightly advertised brands, well above the 15 exposure threshold. Gionee’s advertisement would have been seen 210 times!  However, one slices the data, there is cause for concern.  Are these brands overexposing themselves to their detriment?

The research data on repetition effects I refer to above are from American consumers.  So one question to ask is, are Indian consumers different?  My intuition suggests that they cannot be that different.  Seeing an Amazon ad 90 times, an Axe ad 120 times, a Raymond ad 150 times, and a Gionee ad 210 times cannot reasonably be expected to not turn off a consumer through over exposure. Repetition beyond a reasonable level is annoying and turns consumers off a brand, be they American or Indian. Thus, I would submit that there is a significant degree of over-advertising in the Indian marketplace, which is not doing the sponsoring brands any good, and most likely hurting them. I’d like readers to weigh in with data from Indian consumers in support or otherwise.

How are EMNCs and Japanese firms different in their management strategies?

EMNCs are starting to globalize seriously. Their management strategies differ from the those of firms from developed countries. How should Japanese firms think about EMNCs? This time, we bring the latest info on EMNCs from Professor Amitava Chattopadhyay of INSEAD.

How to Frame Goals to Increase Motivation

Most of us have set goals for ourselves before, whether it’s losing weight, saving money or training for a marathon. Goals help us to focus our minds on achieving what we set out to do. We know that setting goals makes us more likely to attain what we want. But there are differences in what motivates people to achieve goals, which has implications for managers who have to use them to generate a behavioural response, either in customers or employees.
For some of us, we achieve our goals easily. We find ourselves highly motivated and we set out to achieve them, but maintaining them becomes a real challenge. Keeping to our weight or a grade average at school, for example, can seem the harder part of the journey. But for others, it’s the opposite. That is, we feel motivated to tend to what we’ve already achieved, with the attainment of the goal being the real struggle.

These differences, in the ease with which we pursue attainment goals versus maintenance goals, depend on how the individual sees themselves in relation to others. In our recent paper Pursuing Attainment versus Maintenance Goals: The Interplay of Self-Construal and Goal Type on Consumer Motivation, Haiyang Yang, Antonios Stamatogiannakis and I found that people from more independent cultures, such as the United States for example, find attaining goals more motivating than maintaining them and those from more interdependent cultures, such as China, were more motivated by maintenance than attainment.

Pursuing Attainment versus Maintenance Goals: The Interplay of Self-Construal and Goal Type on Consumer Motivation

This research examines how self-construal (i.e., independent vs. interdependent) and goal type (i.e., attaining a new state vs. maintaining the current state) are conceptually linked and jointly impact consumer behavior. The results of five experiments and one field study involving different operationalizations of self-construal and goal pursuit activities, suggest that attainment (maintenance) goals can be more motivating for participants with a more independent (interdependent) self-construal, and that differences in salient knowledge about pursuing these goals are one potential mechanism underlying this effect. This interaction effect was found within a single culture, between cultures, when self-construal was experimentally manipulated or measured, and when potential confounding factors like regulatory focus were controlled for. Importantly, the effect was shown to impact consumers’ goal pursuit behaviors—losing vs. maintaining weight—in the field. These findings add to theory and offer insights, to both consumers and managers, on how the goal types can be leveraged.

Six Lessons for Setting Your Business on a Growth Trajectory

The refrain I often here among practitioners is that they are facing declining growth, ever increasing competition, and loss of pricing power and thus margin. Is this inevitable in the world of business today, or is there a way that businesses can recharge growth and regain margins? Below are three case studies of companies that have successfully recharged profitable growth and there is a remarkable commonality in their paths to success. We first report the case studies and then draw out the lessons for recharging profitable growth in your business.

Brands crying wolf (stock out) once too many times can hurt their own brand reputation and that of their retailers’!

A Times of India article on July 29, 2014, reporting on the launch of the Mi 3 smartphone by Xiaomi, the Chinese smartphone manufacturer, said that “Xiaomi has claimed that its Mi 3 smartphone went out of stock in just 5 seconds, … when it was put up on sale on Flipkart today. Last week, it had taken 39 minutes for the stock to finish when Mi 3 was first put on sale by the company…Xiaomi has, like last time, not revealed exactly how many units were up for sale in this round.” 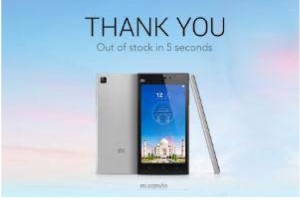 Consider this, in the first round of sales on July 25th, 100,000 people registered on Flipkart, the Indian online retailer, for the Mi3 smartphone. With two rounds completed, not all of the 100,000 people who originally registered have yet been able to acquire an Mi3 handset and, according to the Times of India, Xiaomi has “allowed more people to register for the device.” This has made matters even more aggravating for those who are waiting in line.

To rub salt on the proverbial wound, Xiaomi has now announced: “Note that users who have previously registered will have to register again for a chance to purchase” for the next “flash sale” that is scheduled for August 5, 2014.

Not surprisingly, consumers in India are unhappy. Some consumers have tweeted, expressing dissatisfaction about the difficulty of registering in the first place! One irate consumer, a tech blogger with 11,800 followers (twitter handle @Rajupp) has uploaded a video of his negative experience on YouTube, tweeting the link! Others have tweeted their frustration!

Xiaomi appears very happy with the results: Manu Jain, India Operations Head, Xiaomi, said, “We are pleasantly surprised and delighted with the overwhelming response we have received from our India fans.”

I am, however, not so sure that Xiaomi will be happy in the long run. As I said earlier, there is a fine line between signaling you have a hot product, and annoying consumers through what blatantly appears to be a deliberate ploy. The negative reactions are mounting, and my take is that this is likely to damage the brand reputation of Xiaomi in the Indian marketplace. It is also likely to damage the reputation of Flipkart, since anger is likely to spillover on to the retail partner, and it has in this case!

Keynote address at the UBS Consumer and Retailing CEO Summit on how companies from China and elsewhere around the emerging world are building branded global businesses.

What would be the most important element in efforts to break into emerging markets by global MNCs and maintain a successful corporation, and why?

Awful tragedy sparked public's conscience. Protests hark back to the 60s. Will we see change? Will change last? "Ge… https://t.co/dOpZit7ptr

One more nail in the coffin of the justice system. Supreme Court justices shouldn't have political roles after reti… https://t.co/N68JpRy2Vj

I so hope the initiative succeeds! "Climate change: New rules could spell end of 'throwaway culture'"https://t.co/cSdHYmNQzS

How true! "Coronavirus: A problem unlike anything else Trump has faced"https://t.co/s0IOGObVhX

Just when it seems that all the news is bleak, a story like this reminds us that most people are good and the riote… https://t.co/aJneEElrqA