Transforming a Supply Chain Into a Social Enterprise

For conventional, profit-seeking companies, moving into social impact carries huge contradictions. An ad hoc, small-scale initiative is an inexpensive way to do a bit of good and receive a nice warm glow in the process. But any attempt to achieve more serious impact through scaling the initiative will likely trigger awkward discussions about how much that warm glow is worth to the firm. Thus, the ceiling remains low on social impact unless it can be justified in “win-win” terms. Needless to say, this is no easy feat.

My recently published case study[1] about Swedish oils and fats producer AAK’s “Kolo Nafaso” programme in West Africa describes how one company redefined “win-win” by creating a sustainable and scalable shea butter supply chain. In so doing, AAK was able to use business as a tool for maximising social impact, creating ripple effects with strongly positive implications for the firm’s most important stakeholder relationships and future activities in the region.

An Unexpected Product Benefit Can Be a Powerful Marketing Tool

As companies test a new product, they often learn that it can deliver unexpected benefits. This very famously happened in the case of Viagra, a product originally developed to treat cardiovascular problems. During the first human trials of the compound, a study nurse reported that male subjects would frequently lie on their stomachs on the examination table, trying to hide their erections. The compound did indeed dilate blood vessels, just not where expected.

It is common for companies to discover unintended benefits to their products after launch, once customer reports start flowing in. This is particularly true in the health and beauty industry. Just read online reviews for omega-3 supplements and you will find people claiming the heart health supplement helped them with a wide range of issues, from brittle nails to weight loss. Similarly, Botox was approved for cosmetic use in 2002, but users soon started reporting that the injections improved their migraines as well. It was licensed for this type of treatment in 2010.

Research has shown that consumers value a product’s benefits more when they believe a firm was intentional about creating them. For instance, if a company launches a programme that accidentally helps the environment, it is less likely to get praise than if the programme was expressly designed for that purpose. In law, premeditated crime is punished more harshly than an involuntary act that led to the same result. Intentions matter, because they are associated with effort, and effort with value (whether positive or negative).

However, another stream of research suggests that an unexpected benefit can pique consumers’ interest and lead them to anticipate other potential benefits from the product. This has a biologic basis: Studies on mammals (from rats to humans) have shown that receiving an unexpected reward (such as a squirt of juice instead of plain water) fires up neurons in the regions of the brain associated with reward anticipation and seeking. In a way, a nice surprise is perceived as a sign of more good things to come.

How Your Firm Can Reignite Sales Growth

When Steve Jobs returned to Apple in 1997, the company’s annual losses were in excess of US$1 billion.  Bankruptcy loomed on the short-term horizon. One of Jobs’ first moves was to hire an ad agency to help him rebuild the brand’s status. It resulted in the famous “Think Different” campaign.

At the campaign launch, Jobs told the audience that to him, marketing was about values. “It’s a very noisy world,” he said. “We have to be really clear on what we want people to know about us.” Apple wouldn’t achieve much by talking about “speeds and feeds” or “bits and mega-hertz”.

Indeed, the campaign focused on iconic personalities of the 20th century. The implication, cleverly pointed out by Jobs, was this: If these inspirational figures had been born in the computer age, each and every one of them would have been Mac users. With its universal resonance, “Think Different” ushered the long-awaited return of Apple to profitability.

A brand beset with myriad problems

During the same period, a merger saw the birth of Diageo, the world’s biggest player in the alcoholic beverage market and the seventh largest food and beverage (F&B) company. As the merger benefits were slow to materialise, management was soon under pressure to revive sales of its Scotch whisky Johnnie Walker, the crown jewel in the company’s portfolio.

He stood, looking at the mountain beckoning him – the two horn-shaped peaks separated by a low saddle bathed in golden light. He breathed heavily. He and his brother had been walking 25-35 kms every day, perhaps pushed too hard by the tour guide. Nausea coursed through his body even as the magnificent mountain filled him with wonder, but sensibility prevailed.

Slowly, he turned and started walking back. Amitava Chattopadhyay had undertaken the treacherous hike to the Manaslu Base Camp at 15,750 feet in Nepal, to prove to himself that while turning 60, he could still do it.

If it were not for a speaking engagement he had the day after, he might have trudged on. Continuing meant putting his professional commitment at risk.

He returned unsuccessful but unbroken, knowing he would be back with better planning to conquer this mountain of his spirit.

How Your Logo Shapes Consumer Judgments

The shape of your logo affects how consumers perceive your organisation, its products and even its behaviour.

While they’re commonly called “intangible assets”, logos matter. GAP learned this lesson when it attempted to change its logo, but quickly abandoned the endeavor after it met with a furious backlash from followers on Twitter and Facebook. The fact that GAP had suddenly decided to update its iconic and classic logo without consulting its loyal fans was just one reason for its failure.

What the retailer hadn’t realised was how the subtle aspects of its logo were perceived and how a complete revamp might affect those perceptions.

As my colleagues and I point out in a new paper, a logo’s shape can affect the judgments people make about the attributes of a company or product. Specifically, we find that circular or angular logos activate associations of “softness” and “hardness” respectively.

These associations extend beyond physical notions of softness and hardness. For example, if a person is reading an ad for a services company, the notion of softness may give the reader the image of the company as being more sensitive to its customers.

An emerging cola brand from Peru schools the giants on how to achieve big growth.

AJE, the Peruvian purveyor of Big Cola, with global sales of $2 billion, has achieved sales growth of an average 22 percent per year from 2000 to 2013. PepsiCo on the other hand, recently outperformed Coca-Cola’s negative 1 percent growth in net sales (and 3 percent decline in profits) by reporting a topline growth of 4 percent. AJE may be a minnow compared to the big cola companies, but it’s outperforming them. 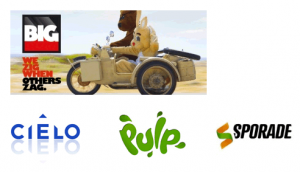 Pushy customer service representatives trying to drastically alter the decisions of consumers can end up being a costly headache.

When Ryan Block, a product manager at AOL, tried to cancel his personal Comcast internet service, he hadn’t banked on a 20-minute verbal wrestling match with a customer service rep hell-bent on retaining him.

Refusing to accept his request to disconnect, the rep repeatedly asked, “Help me understand why you don’t want faster internet,” insisting that “I’m trying to help you. You’re not letting me help you.” Getting tired of the uphill struggle, Block recorded the final eight minutes of the call and shared the audio file with his 83,000 Twitter followers. The audio file went viral, being played 4 million times in the next two days.

This is odd. Campeol's wife and a chef at his restaurant invented tiramisu. So, how is it that Campeol is the 'fath… https://t.co/ec1JFNRnfT

The beauty of nature's colors sometimes just takes the breath away. Taken during a late afternoon walk in the neigh… https://t.co/5eRGMqaoZ4

Will someone explain what Virat and team's fear is? I'm baffled. The infection is in the India team. Playing isn't… https://t.co/3JjAHLt2e4